Vigilant Solutions announces today that the Fairfield Police Department in Connecticut used its license plate reader data and LEARN software to solve a purse snatch case involving an assault on a pregnant woman.

Deputy Chief Chris Lyddy reports on the case, “On February 21st, we had a very bad purse snatch. A young woman, 6 months pregnant, was walking out of a local gas station when a suspect wearing a hoodie grabbed her purse. The suspect jumped into a dark color Nissan. The pregnant woman, in trying to retrieve her purse, was dragged by the suspect’s vehicle as he attempted to flee. The woman had to be hospitalized due to her injuries.”

“We thought that we had caught a break when a witness reported a license plate for the suspect vehicle,” continues Lyddy, “but in running the plate against Connecticut DMV data there was no match. Surveillance video from the store was obtained, but it was poor quality and also yielded nothing for us other than to confirm the vehicle description. Knowing that witnesses sometimes do not accurately recall license plate numbers, and having just received access to Vigilant’s online LEARN software and national license plate reader (LPR) database, I decided to try searching various partial plate combinations. We developed a list of around 750 possible suspect vehicles, but these were all eliminated through the course of the night.”

Lyddy continues, “The next morning, I returned to the office and continued searching the database as new license plate reader data is always coming in from Vigilant’s network. I searched every few hours, until finally at 3pm that afternoon, I found a match on a partial plate that looked like the suspect vehicle and was in relatively close proximity to the crime scene. With this new lead, and marrying the full license plate number to an individual through DMV records, we were able to quickly have some officers go and monitor the vehicle at the location.” 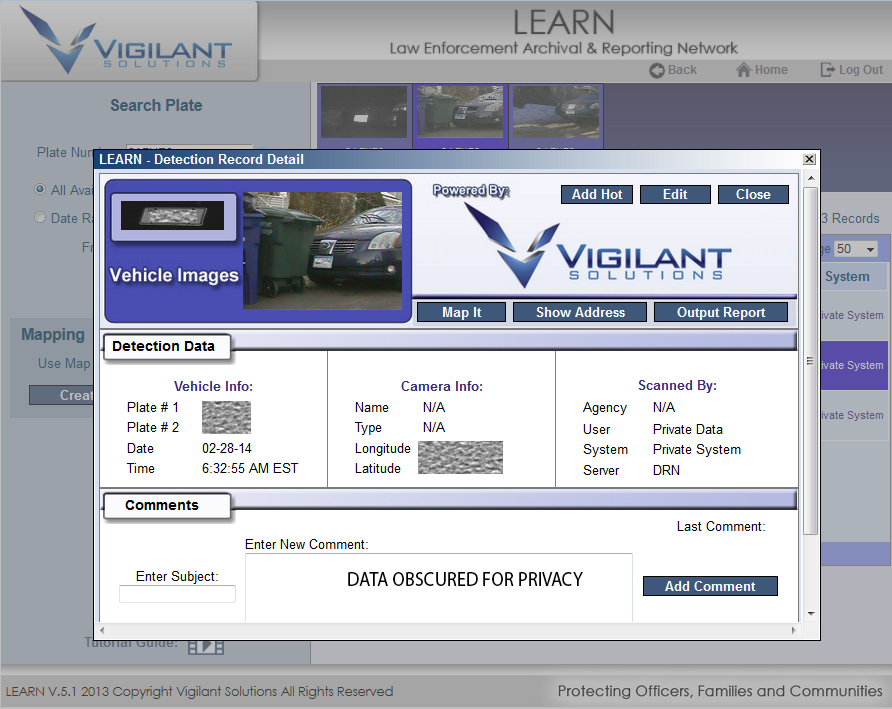 “One hour later, a male wearing a hoody and a female entered the vehicle and left the location. Officers stopped the vehicle, and within only a few minutes, both confessed to the purse snatching, the purse was recovered, and the two suspects were arrested. Most importantly, the mother and baby are doing well and are expected to fully recover.”

Lyddy concludes, “I am thankful for the availability of this data collected by Vigilant and made available to law enforcement, as we may not have solved this crime otherwise. I hope that the legislators that are looking to abolish the commercial use of LPR in Connecticut think about the impact that this will have on public safety. My budget simply would not allow for the same level of service that Vigilant can provide through its operations.”