Senior Police Officer Geoff Walsh last week drove on a street downtown when an alarm in his patrol car sounded. It went off again a few seconds later, accompanied by a computer-generated voice that said, “Medium priority alert.” 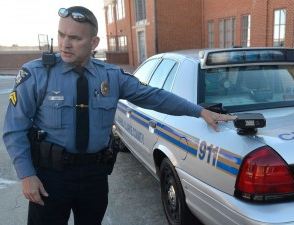 It was a license plate reader (LPR) from Vigilant Solutions letting the officer know that two cars parked on East Washington Street had expired registrations.

Trunk-mounted cameras on Walsh’s patrol car, capable of taking as many as 5,000 photos per hour, scan vehicle tags and compares them to a database of cars that are unregistered, uninsured or reported stolen.

But the potential uses for LPRs are so much greater.

Since local police began using the system last summer, officers have made several felony arrests after they stopped cars for motor vehicle law violations and found the driver was a wanted criminal.

An LPR even helped solve an Eastside Athens bank robbery in January.

“It’s been a great tool for us, and we’re just scratching the surface of what it can do,” Walsh said.

Tag numbers are entered into the Athens-Clarke police LPR system about twice a month from the Georgia Crime Information Center. There currently are about 2.5 million tag numbers in the system.

Athens-Clarke Assistant Police Chief Carter Greene said four cars are currently outfitted with LPRs — one patrol car each from the east and west precincts, the downtown substation and a traffic unit.

The police department received the systems in March, then after training officers to use them, the devices went live sometime in the summer, he said.

On Walsh’s car, two of the cameras are angled forward, and the other two toward the back.

That way, they can take photos of cars in two lanes of travel as an officer approaches or passes vehicles from the other direction.

The LPRs work so good that officers must prioritize which cars they stop to issue citations.

Walsh said that one day he got out to write up a violator’s ticket and upon returning to his patrol car saw that the LPR registered 14 “hits” on tags of cars that passed by.

“This thing can send you off in 10 different directions at the same time, so you have to be head-smart so you’re not chasing your tail,” Walsh said. “Sometimes you have to swallow your pride and let someone go for another day.”

Stopping an uninsured vehicle takes priority over chasing down an expired registration.

“We have to take those vehicles off the road,” Walsh said. “In the event of a wreck, you don’t want a person without any insurance hurting somebody.”

Even though an LPR might sound an alert on a tag, an officer must still verify violations by checking with GCIC, the state crime database.

In addition to regularly updating the LPR system with new tag numbers to locate motor vehicle law violators, according to Greene, a tag can be entered at any time when it’s on a vehicle wanted in connection with an Amber alert or a violent-crime lookout.

Local police have made several felony arrests as the result of LPR-initiated traffic stops after they found the drivers of vehicles with violations also had outstanding arrest warrants or contraband.

A couple of weeks ago, Walsh was patrolling the Athens Perimeter when the LPR alerted him that the car in front of his had an expired tag. He arrested the driver when a computer check revealed he was wanted in Oglethorpe County on a child-cruelty charge. He also was driving on a suspended license and had marijuana in the vehicle, police said.

Sometimes LPRs can help police when they don’t expect it.

On Jan. 7, a man robbed in Oconee State Bank branch inside the Lexington Road Walmart.

Jamie Elder was one of the first officers to arrive at the scene.

“Once he got to Walmart, he realized he might have gone by the suspect’s car driving away,” Walsh said. “Jamie went through his LPR pictures and, shazam, he found it. He really knocked one out of the park.”

Once police had the name of the car’s registered owner, it took them just a day to track down and arrest the alleged bank robber — 42-year-old Michael Owen Watson of Athens.

While discovering all the different ways police can utilize LPRs is a work in progress, Greene said the next step likely will be to use them to identify scofflaws who owe the county $50 or more in parking fines. And he anticipates additional cars will be equipped with the devices.

“LPRs are a very effective tool in terms of capturing vehicle plates, and I think you will see an expansion of this in the future,” Greene said.